The Blog Minerals and Metals Support our Troops

Minerals and Metals Support our Troops

On Veterans Day, we honor every man and woman who has served and continues to serve our country. When the world needs them most, our military is there to answer the call of duty. Their selfless acts of bravery ensure our freedom and the future of the American way of life.

For the millions of American miners across the country, there is pride in knowing the importance of the minerals they produce to our national defense. We can’t ignore the critical role minerals play in our military capability. Minerals serve as foundational elements for jet fighters and body armor to lifesaving supplies and technologies. None of it would exist without minerals and metals.

Before an F-16 can break through the sound barrier, nearly 1000 lbs. of rare-earth minerals are needed to manufacture the engines. After patrolling our oceans for years, Naval vessels are kept in ship-shape with anti-corrosive copper, keeping hulls and communications systems intact. Metals are a core part of what makes America’s military one of the most powerful forces globally. Even with this immense strength, the U.S. has an “Achilles’ heel” that is currently threatening our ability to protect those keeping us safe here at home. 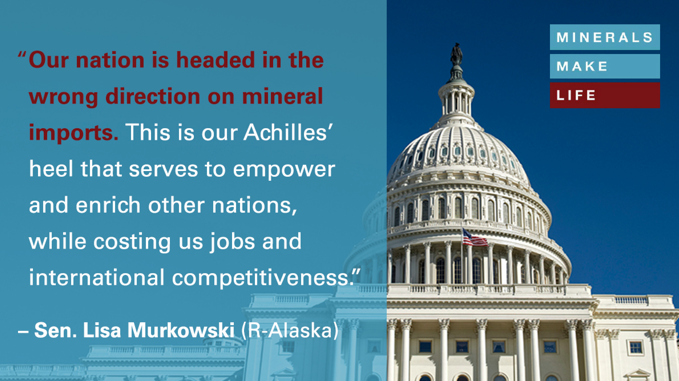 Both new and existing mining projects are becoming increasingly threatened by proposals to increase regulations and fees that restrict promising investments in America’s domestic minerals mining operations. How bad is our foreign mineral dependence? In the last 20 years, the U.S. has doubled its reliance on imported minerals. We are now 100 percent reliant on 18 of the 48 minerals imported from foreign nations—many of which are deemed critical for our national defense.

To put our import dependence in perspective, a U.S. Navy Seal today carries gear containing at least 23 mineral commodities for which the U.S. is more than 50 percent import reliant. In any given year, the Department of Defense uses up to 750,000 tons of minerals that help manufacture equipment and tools that collectively form the backbone of America’s military might.

Amidst turbulent international trade relations, or conflicts occurring on the other side of the globe, the U.S. is at a strategic disadvantage when it comes to promising our troops a stable supply of minerals.

Our mining policies deter timely access to minerals that are in plentiful supply within our nation’s borders. Compared to nations with similar environmental protections, a mine permit can often take up to three times longer to navigate the many duplicative channels of regulatory review. We are witnessing a strategic disadvantage that continues to grow, year to year. We need to turn the tide by implementing smart policies that streamline the mine permitting process for our domestic mineral resources.

The actions of our decision makers in D.C. directly impact the lives of those selflessly serving our country. The troops deserve a supply chain that isn’t subject to the ebb and flow of foreign markets or political squabbles.

Defending those who fight for us is a civic duty that cannot be overlooked. Join us in taking action to support our nation’s national defense and those who serve.

Each year on December 6, we celebrate National Miners Day. This o...

Congress passed the largest investment in U.S. infrastructure in ...

@MiningFan
The mining workforce is expanding alongside growing mineral demands. Explore the exciting career opportunities are… https://t.co/z0VSE51n9x
@MiningFan
China is gearing up to further consolidate it’s control over battery metals production. See why, if we’re not caref… https://t.co/20XtvH8SeN
@MiningFan
Gold may not be the first metal that comes to mind when thinking of technology, but it’s virtually irreplaceable in… https://t.co/NdFMX2WfGg