Minerals and metals are critical components of the technologies and equipment that support our Armed Forces. For example, copper is critical to the production of jets, tanks and warships. Beryllium, which is six times stronger than steel, yet lighter than aluminum, is used to enhance the speed of aircraft and is essential to surveillance technology. Rare earth metals make sonar possible for submarines and are used in night-vision goggles.

The volume of minerals used by our military is astounding. The Department of Defense uses 750,000 tons of minerals in the technologies that protect our nation annually. A strong military requires a stable, secure and abundant domestic supply of minerals and metals, yet America’s lengthy and duplicative permitting process has resulted in a growing reliance on imports for a wide range of minerals. This import reliance threatens the military supply chain, as supplies of many minerals vital to our security is partially or fully controlled by other countries.

See our infographic to learn more on the role of minerals and metals in our national defense. 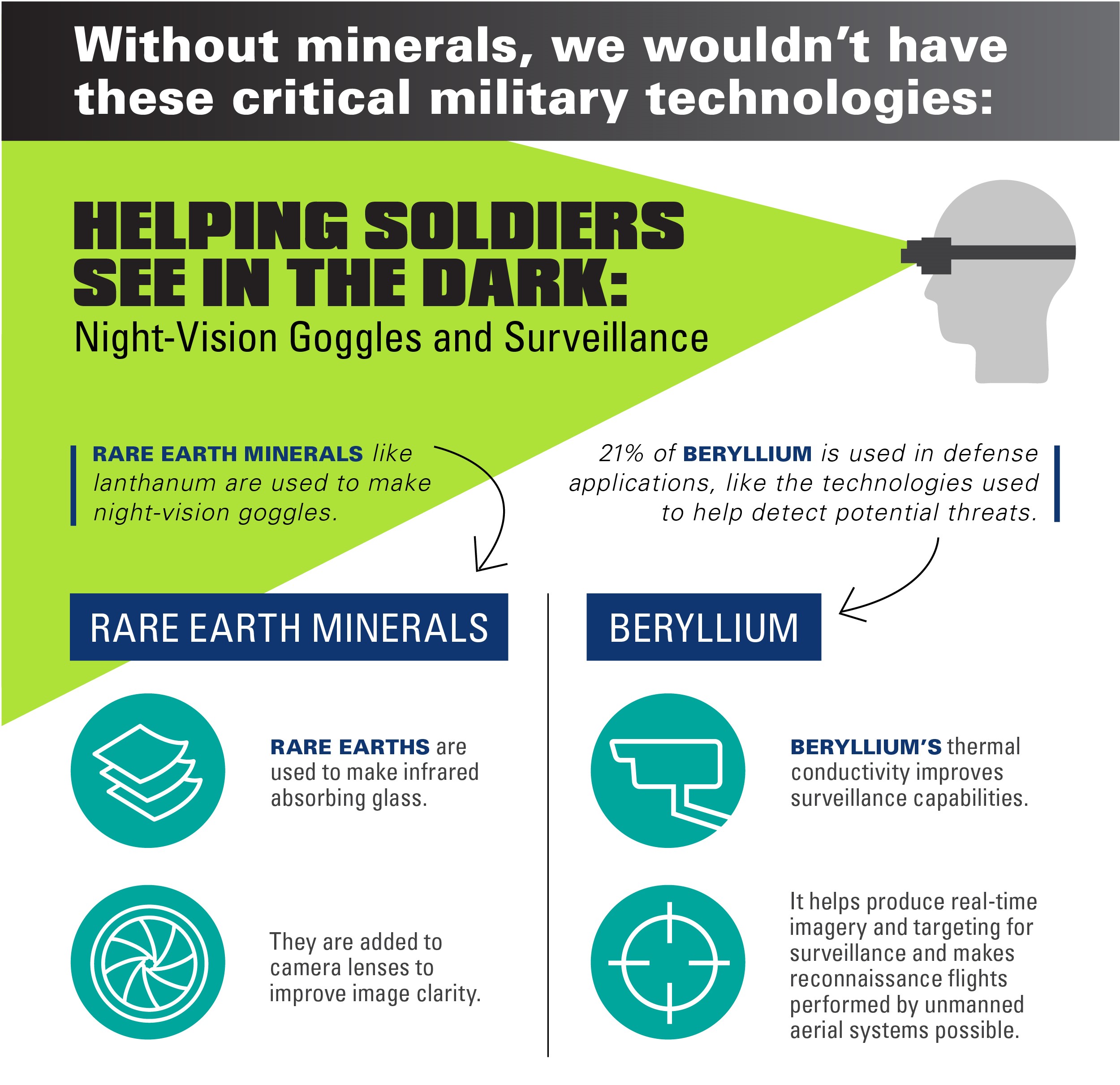 Understanding the critical importance of minerals to our defense, a group of policymakers have been working to provide our military with timely access to domestic mineral resources. In May, the U.S. House of Representatives passed an amendment proposed by Rep. Mark Amodei (R-Nev.) to the National Defense Authorization Act (NDAA) that promised to streamline the mine permitting process for critical minerals. Parallel amendments were then championed by Sens. Lisa Murkowski (R-Alaska) and Dean Heller (R-Nev.) in the Senate.

These amendments came in part as a response to President Trump’s recent Executive Order, “A Federal Strategy to Ensure Secure and Reliable Supplies of Critical Minerals.” The president directed government officials to implement policies that help identify new domestic sources of critical minerals and increase access to them by improving the U.S. mine permitting process. These necessary actions would serve to “enhance the technological superiority and readiness of our Armed Forces, which are among the nation’s most significant consumers of critical minerals.”

The proposed amendments would have streamlined the mine permitting process, reducing the timeline from nearly a decade and making the U.S. competitive with nations like Canada and Australia, which adhere to environmental standards on par with the U.S. but can access their resources in a fraction of the time. In addition to supporting economic growth across a variety of industries, the streamlined process would secure the supply chain for minerals needed for national defense by providing better access to minerals and metals found here in the United States.

Unfortunately, the NDAA passed in the Senate without these important amendments attached. This is a missed opportunity for our nation to take a pivotal step in the right direction for improving our supply chain security. It is unacceptable that the U.S. must struggle to tap into our wealth of mineral resources due to a lengthy and inefficient mine permitting process.  More than a million men and women put their lives on the line to defend our nation every day. We cannot fail them. And we most certainly cannot fail them due to duplicative and outdated policies.

It’s not too late to make your voice heard. As the NDAA heads to conference, now is the time to take action. Our policymakers must know what is at stake if we do not quickly act in favor of our national security.