Barrick Gold Corporation and Newmont Mining joined forces in April to teach Nevada students about the role mining plays in supporting their community during their five-day “Gold Fever” event. Local students from Elko, Nev., learned about the various uses of minerals and how the mining industry is a significant contributor to Nevada’s economy, as it creates good-paying jobs and generates wealth for a variety of downstream sectors – from energy technologies to construction.

The event attracted nearly 800 fourth-grade students from local elementary schools – many of whom were able to learn more about what their parents do for a living:

“The kids come into Gold Fever already excited about mining because so many of them have family members in the industry. This program takes that excitement to the next level—and hopefully inspires tomorrow’s leaders in the industry.” – Maria Anderson, community relations specialist for Barrick Gold

Don’t be fooled by the event’s name, however, as Nevada is a key state for an array of mineral resources. In fact, Nevada is often referred to as the “Silver State.” It remains one of the largest mineral producers in the U.S. More than 20 minerals are currently produced in Nevada; the state is even home to the only producing lithium mine in the country. When mining first established itself in Elko in the 1970s, the town became a flourishing community with a healthy economy, growing population and booming businesses. Those positive effects on the local community can still be felt today, as the mining industry employs tens of thousands of Nevadans, both directly and indirectly.

Like Elko, many communities throughout the U.S. benefit from and, in some cases, are sustained by the mining industry. The metals mining industry provides thousands of Americans with well-paying jobs – the industry boasts an average annual salary of $88,000. Additionally, industries that use minerals and metals as raw materials contribute trillions to the GDP—spurring continued job growth. And many of these industries are powering the tools we use every day, as well as the technologies of tomorrow. 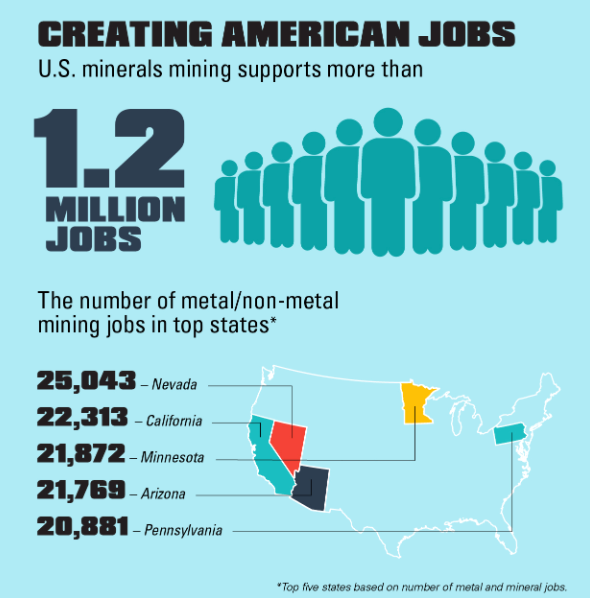 Unfortunately, counterproductive policies are stifling this growth. Despite its role as an economic driver for our economy, a duplicative and outdated mine permitting process has deterred investments in mining. NMA President and CEO Hal Quinn notes that, “As the location of roughly 80 percent of U.S. gold production, Nevada is directly affected by the current process. A report from the U.S. Geological Survey noted that even in mining-friendly states such as Nevada, mine development is severely hampered by regulatory delays.”

Currently, it can take anywhere from seven to 10 years to get a permit in the U.S. These protracted delays not only curtail minerals development, inhibiting our vital industries, but they also harm local economies that rely on the mining industry to support their families. If we want to support the future of communities like Elko, it’s time to streamline the process and bring investment back to the U.S. mining industry. Fortunately, the industry is collaborating through projects like the “Gold Fever” event to provide students with the resources and education they need to develop future careers and to ensure the longevity of our mining communities. Find out more about how minerals mining supports its communities here.

But our industry cannot do it alone. We need the support of our policymakers and community to establish a modernized mine permitting process. Without a streamlined process that removes unnecessary delays, we prevent our industries from timely access to the resources they need to grow and innovate. Help us take action here by telling your policymakers that it’s time to put our communities—like Elko—first!

Mining for Jobs in Nevada

With Newmont Mining Corporation and Barrick Gold, two of the wo...

Nevada mining: A point of pride

When it joined the United States in 1864, Nevada was a fledglin...

On Monday, it was announced that Nevada’s economy produce...

@MiningFan
Our quality of life would drastically decrease if not for key minerals. Rediscover the technological need for… https://t.co/mzNhCCIF6X
@MiningFan
.@mining explains why Apple’s idea of a “closed-loop” manufacturing system for recycled minerals won’t fully meet f… https://t.co/7qUNl2VtaC
@MiningFan
On the topic of EV batteries, Mining Technology breaks down the boom in #lithium mining and the #minerals that coul… https://t.co/pGXluHNsbO