Resources Newsletters Modernizing NEPA: A Fix After 40 Years of Issues

Modernizing NEPA: A Fix After 40 Years of Issues

As an essential industry that has continued operations throughout the pandemic – delivering the raw materials necessary to strengthen our domestic manufacturing, medical and national defense supply chains even as global supply chains have faltered – the U.S. mining industry has proven its ability to keep its people safe, protect the environment and safeguard the communities in which it operates and at every step of the mining process. Yet still, permitting delays and regulatory uncertainty continue to hamper investment in domestic resources, increasing our reliance on imports. In an effort to cut through unnecessary red tape, plans are finally in motion to reform the foremost causes of our country’s receding competitive position – regulatory policies that have gone unchecked for too long.

The National Environmental Policy Act (NEPA) was signed into law in 1970 to ensure consideration for the effects of proposed federal actions on the environment, ranging from road building and mining projects to alternative energy projects. Since its inception, NEPA has proven time-consuming and costly for the federal agencies implementing it and the businesses seeking permits. After 40 years of delayed projects, the current administration has taken steps to modernize NEPA, updating the regulations to streamline decision making and implementation – cutting down on paperwork to focus on what matters. 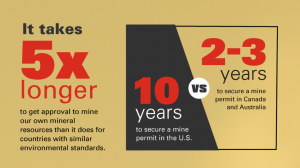 The Trump administration identified comprehensive revisions to NEPA regulations that will promote more efficient, effective and timely environmental reviews by all federal agencies. From page and time limits to clearly established roles for necessary agency involvement, these reforms will better align NEPA with its intended purpose: to balance societal needs with world-leading environmental protections.

Although the U.S. is rich in mineral resources, the U.S. government’s process for securing necessary mine permits takes close to 10 years – compared to Australia and Canada which have similar environmental standards and practices as the U.S., but only take between two and three years. Permitting delays have been called the most significant risk to mining projects in the United States, and it shows. American businesses and communities aiming to launch new ventures, anticipate NEPA reforms as a step in the right direction to eliminating project delays, unnecessary costs and overall regulatory uncertainty. 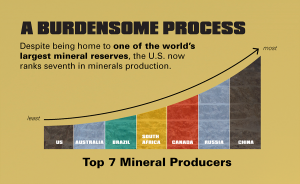 As one of the most heavily regulated industries in the world, governed by dozens of federal, state and local environmental laws and regulations, members of the mining industry support the government’s efforts to reduce bureaucracy while maintaining robust environmental protections. Our industry has long suffered from a broken permitting process that can largely be linked back to duplicative and outdated policies such as NEPA. With an abundance of U.S. mineral resources, American industries are eager to restore critical supply chains that have suffered from inaction to fix our policy landscape.

Learn how policymakers can help America succeed by reforming NEPA.