The Blog NEPA Reform: Four Decades in The Making

The National Environmental Policy Act (NEPA) was signed into law in 1970 to ensure consideration for the effects of proposed federal actions on the environment, ranging from road building and mining projects to alternative energy projects. Since its inception, NEPA has proven time-consuming and costly for the federal agencies implementing it and the businesses seeking permits. After 40 years of delayed projects, the current administration has taken steps to modernize NEPA, updating the regulations to streamline decision making and implementation, and cutting down on paperwork to focus on what matters. 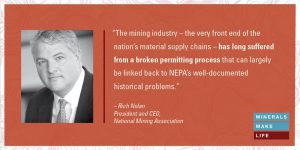 Under the Trump administration, the Council for Environmental Quality (CEQ) has identified comprehensive revisions to its NEPA that will promote more efficient, effective and timely reviews by all federal agencies. Key documents such as the Environmental Impact Statement (EIS), took four years to produce and could be over 1,500 pages long. Today, a typical EIS is 150 pages long and takes just over a year to develop.

The mining industry takes extraordinary steps to protect the environment, the communities in which it operates and its workforce at every step of the process from exploration, to development, production, reclamation and closure. And yet, permitting delays and regulatory uncertainty hamper investment in domestic resources, increasing our reliance on mineral imports.

While the U.S. is rich in mineral resources, the U.S. government’s process for securing necessary mine permits takes close to 10 years – one of the longest mine permitting processes in the world. By comparison, permitting processes in Australia and Canada, which have similar environmental standards and practices as the U.S., take between two and three years. Permitting delays have been called the most significant risk to mining projects in the United States by policymakers and industry leaders.

“The mining industry – the very front end of the nation’s material supply chains – has long suffered from a broken permitting process that can largely be linked back to NEPA’s well-documented historical problems. These overdue reforms improve a process that has become a barrier to rebuilding and modernizing essential infrastructure of all kinds,” said Nolan.

As one of the most heavily regulated industries in the world, governed by more than a dozen federal environmental laws and regulations, members of the mining industry support any action of the government that reduces bureaucracy while maintaining robust environmental protections. With an abundance of U.S. mineral resources, American industries are eager to restore critical supply chains that have suffered from two decades of import dependence.

Learn more about the policies that are preventing America’s mining from reaching its full potential.

@MiningFan
America’s mineral supply – or lack thereof – is a policy problem, not a geology problem. Learn why in this op-ed fr… https://t.co/90d3vf3VTn
@MiningFan
With China cornering the EV minerals market, experts point to U.S. domestic mining as a way to secure supply chains… https://t.co/ezvXLZdi8A
@MiningFan
The U.S. needs more domestically sourced #minerals and @TalonMetals is stepping up to the plate. Learn how this Min… https://t.co/kMd5W3yMfd