Accelerated developments in energy technologies present a strong opportunity for American progress in the post-COVID-19 global economy. As nations compete to lead the future of advanced energy technologies, minerals mining and strong domestic supply chains will be an essential foundation for success.

The amazing properties of metals like copper, cobalt and lithium are essential for the construction of electric vehicles and charging stations. Other forms of alternative energy require considerable amounts of metals. Together, these emerging markets are deeply linked with mining – a relationship that has The World Bank, Wood Mackenzie and Deloitte projecting a surge in metals demands that far exceeds current levels of output. The U.S. is waking up to this reality and must work quickly to secure its mineral supply chains and maintain its place as a leader in advanced energy technology and manufacturing. 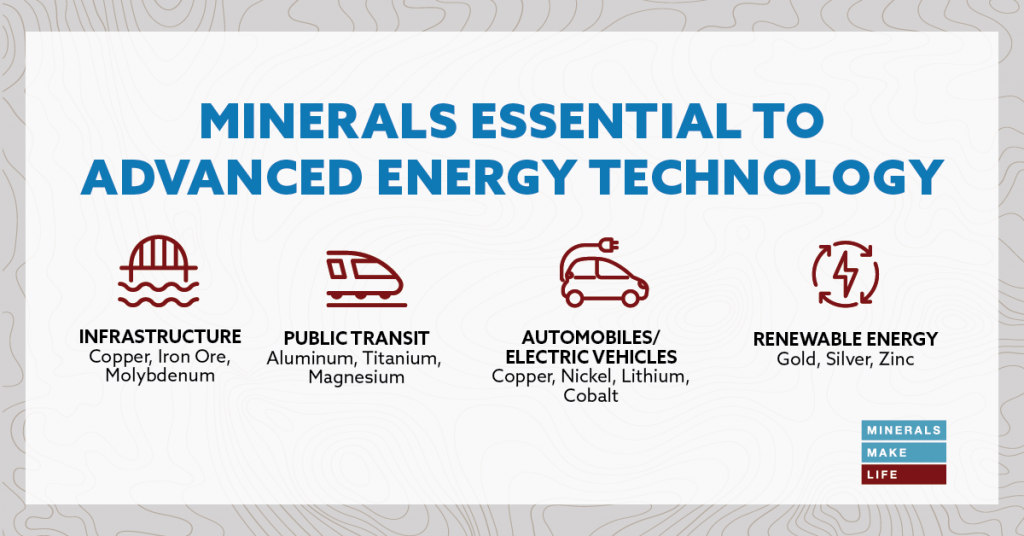 While the U.S. has vast amounts of untapped mineral resources, mineral demand will quickly outpace U.S. mining’s ability to respond. On average it takes seven to 10 years to get a mining permit in the U.S. while in Canada and Australia it takes two to three years, placing the U.S. in a position that is ripe for action from policymakers.

In fact, President-elect Biden has committed $2 trillion over his first term to rebuild American infrastructure and establish the U.S. as a leader in alternative energy technologies. Policy changes and investments into domestic mining must occur in parallel to ensure the success of those efforts.

Other countries are already acting on this reality. They have worked to prioritize domestic mining to secure their own supply chains. In fact, a Chinese government-funded report noted that if trade tensions between the U.S. and China persist, China will not rule out using its dominance in the rare earth minerals market as leverage. Given the more than $6.2 trillion in mineral reserves that are currently underdeveloped due to cumbersome permitting laws, there is action we can take to ensure this doesn’t happen.

It’s time for U.S. policymakers to take control of America’s future. With commonsense policies in place, the U.S. can begin to secure the foundation of economic growth.

@MiningFan
Copper has always been critical for societal and economic growth, and the clean energy transition has made it even… https://t.co/RwBQnYVN67
@MiningFan
#ICYMI @Sen_JoeManchin is pushing @USTreasury to support the domestic sourcing provisions of the EV tax credit esse… https://t.co/knStnmjdcE
@MiningFan
Mining is “the one basic industry that could make a decisive contribution in the transition to a green economy,” sa… https://t.co/VoQGBMLamo