The Blog Guest post: The value of mining in Arizona

Without minerals, we would not have electricity, food, or shelter. Minerals make today’s technology-based life possible, but that’s something many of us take for granted. We want the benefits from those minerals, but some want mining of minerals to be in somebody else’s neighborhood.  The importance of mining has long been recognized:

If we remove metals from the service of man, all methods of protecting and sustaining health and more carefully preserving the course of life are done away with.  If there were no metals, men would pass a horrible and wretched existence in the midst of wild beasts…  -Georgius Agricola, in De Re Metallica, 1556.

For Arizona, it is not just metals.  Arizona produces sand and gravel, limestone for cement production, coal for electrical generation, and a variety of industrial minerals.

Arizona has a long history of mining.  There is archeological evidence that cinnabar, coal, turquoise, clay, pigments, and other minerals were mined in Arizona beginning at least 3,000 years ago. (See A History of Mining in AZ by the Arizona Mining Association.)

According to the Arizona Mining Association, Arizona currently produces 68% of domestically mined copper.  With that copper production comes by-product molybdenum, gold, silver, platinum, and rhenium.  Incidentally, The Sierrita Mine south of Tucson is currently the only domestic producer of rhenium, a metal used in high-temperature, super-alloy turbine blades for jet aircraft and other land-based turbines.  The Sierrita plant processes output from other mines on a toll basis. It may soon be joined by a second rhenium plant at the Kennecott (Rio Tinto) mine in Utah.

The direct and indirect economic impact of copper mining on Arizona’s economy is about $4.6 billion annually.  That includes $3.2 billion in personal income,  $500 million in state and local government revenues, and 49,800 high-paying jobs for Arizonans. Average labor income of mining company employees (including benefits) is $108,000 per worker vs. $47,000 for all Arizona workers.  If we add in non-metallic, non-fuel, minerals, then Arizona produced about $8 billion worth of mineral products in 2012 according to the U.S. Geological Survey.  Arizona ranks second, after Nevada, in value of total mineral production.  The U.S. total value of mineral production was about $76 billion which supported more than 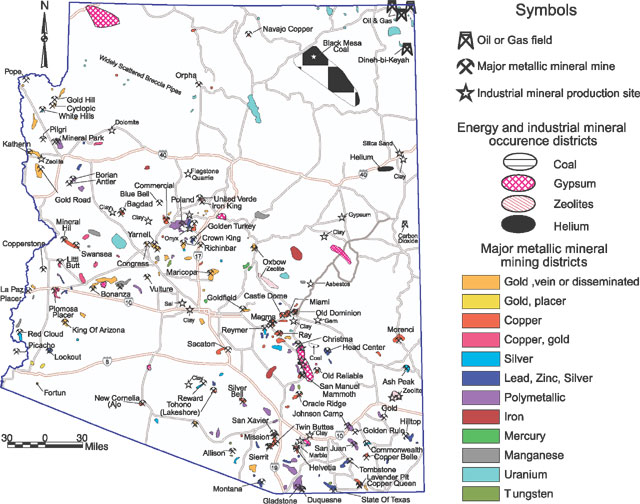 1.2 million jobs in 2012. Arizona is endowed with great mineral resources as shown on the map below prepared by the Arizona Geological Survey.

In addition to past and current mining, there are many projects on the horizon, some in the exploratory stage, others navigating the byzantine regulatory permitting process. For more information on those projects, see the rest of my post on WryHeat.

Jonathan DuHamel is a retired economic geologist who currently writes for WryHeat from the Tucson Citizen.

In an op-ed published in the Arizona Daily Star, Rosemont Coppe...

A recent study prepared for the Arizona Mining Association reveal...