The Blog Minecraft gets Real 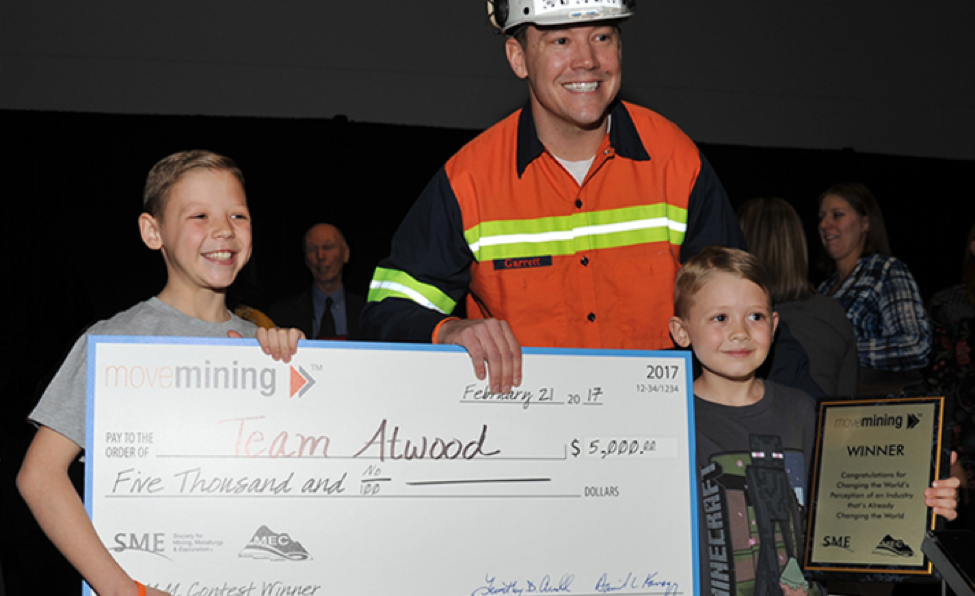 Grand Junction, Colorado – Just before school let out for the summer, a group of students at Wingate Elementary huddled around screens and controllers, eager to play one of the country’s most popular video games– Minecraft.

But this wasn’t your standard game of Minecraft. This particular version was tweaked by two Wingate students to teach kids what it’s really like to mine. Avid Minecraft enthusiasts, Atwood brothers Jayce, 8, and Corban, 11, combined forces with their dad, Garrett — a mining professional and gaming novice — to increase young students’ understanding of the necessity and benefits of mining

Their idea takes an industry not well understood in some parts the United States – despite its prevalence in their hometown – and pairs it with a video game phenomenon that already incorporates elements of mining – from minerals to pick axes – in its virtual world.

The Atwoods entered their idea at the first-ever SME Move Mining competition. The event at Wingate Elementary was a tryout of sorts—a way to test their version of the game with some of its biggest fans — elementary school students.

“Minecraft is relevant to these guys right now,” said Kevin Hoskin, Wingate’s director of after-school programming. “The fact that they can apply a game that they spend a ton of their own free time involved with and have that tie into geology, and renewable and non-renewable resources, that’s going to take them further later.”

Through game-based learning (GBL), the Atwoods’ program gives Minecraft an educational twist that offers gamers a more realistic and competitive mining experience, allowing them to learn what it is like to be a miner. In the Atwoods’ version, players can choose between a variety of power sources like coal, nuclear, wind, solar and geothermal energy. They use modern mass extraction machines, rather than the pick axe. They can also mine for a wider variety of ores and compete using an updated scoring system that incorporates the amount and value of the ore mined, and rewards higher scores when ores are further processed.

The Atwood brothers created their new game scenario after their father heard about the annual Move Mining Competition hosted by the Society for Mining, Metallurgy & Exploration (SME) and judged by a number of mining industry professionals, including Ashley Burke with the National Mining Association (NMA). According to Garrett, Corban came up with a scoring system for minerals featured in the game, providing opportunities to amplify points based on the rarity of the resource and the extent to which it was smelt or refined.

“That’s real life,” said Garrett. “The further you process and refine a material, the more it is worth. It hammers home how we [miners] can use natural resources to make things.”

Players run the risk of losing points if they damage or fail to repair the surrounding environment– mirroring the same responsibility miners demonstrate every day through reclamation processes.

“My brother managed to find a diamond, but he forgot to reclaim his topsoil so he took some heavy point deductions,” said Corban during the competition. “I didn’t mine the valuable ore, but at least I remembered to reclaim […] I didn’t find diamond like Jayce, but I won the game because remembered to reclaim and mine ore.”

As detailed in their concept paper for the competition, the Atwoods plan to officially modify the PC version of Minecraft, something the game’s inventors and owners allow.

Judges were particularly impressed by the game’s ability to make mining resonate with a younger generation and portray a more realistic version of the mining industry. “One of the things that absolutely floored me when they did their presentation is how popular that game is,” said John Chadwick, a Move Mining judge and the editor and founder of International Mining magazine. “Hopefully it’ll raise people’s awareness,” he said. “The industry has changed dramatically for the better in the last 10, 15 years in its management of the environment and the way it lives with its neighbors, particularly rural communities in less developed countries.”

Leveraging Minecraft’s existing popularity is an effective way of teaching a new generation about the importance of mining. More than 106 million copies of it have been sold worldwide and, at any given point, there are one million people playing it. Minecraft enables players to construct their own world in virtual reality. Beyond just building it, players must learn to adapt and survive through exploration, resource gathering, tool building, crafting and combat.

“We need to tap into the excitement and enthusiasm that already exists in virtual mining,” said Corban. “Redeeming the gap between real-world mining and virtual mining and game-based learning will change the way the world views mining.”