Mining’s essential role in our modern world is unwavering — it remains the backbone of America’s technological innovation and future. However, it continues to be restrained by duplicative permitting policies and irresponsible laws that trap mineral-rich lands. Thankfully, both the public and our policymakers are waking up to the importance of minerals.

America’s minerals mining industry received a lot of attention in 2019 — and for good reason. The Department of Commerce released a long-awaited report recognizing the value of minerals mining and recommending wide-scale reforms to the mine permitting process. Experts across the government have acknowledged a need to streamline our permitting processes or face a crippled supply chain in the not so distant future. 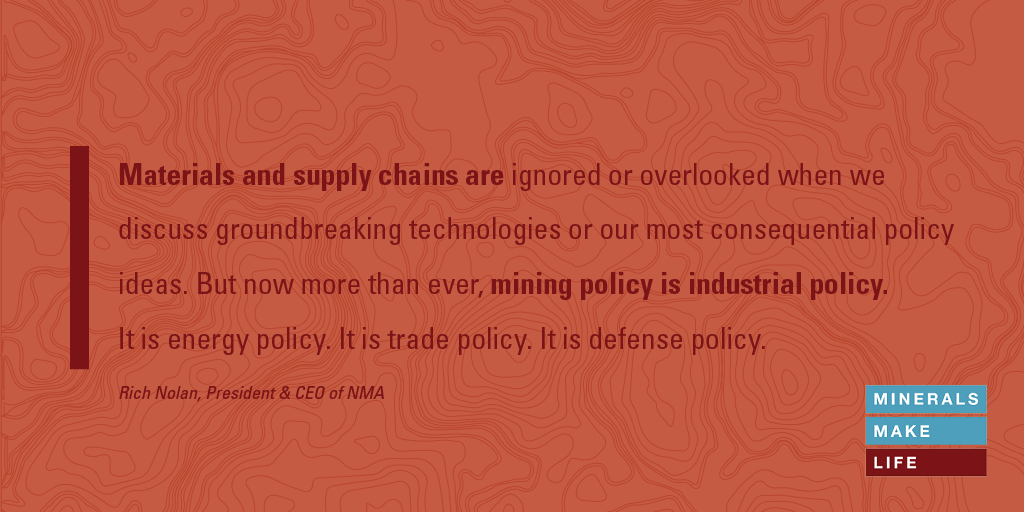 In 2019, the National Mining Association also conducted polling with Morning Consult, revealing that 62 percent of Americans are concerned with our nation’s minerals import reliance. In 2019 these fears remained warranted, as the U.S. was 100 percent import reliant for 18 minerals and more than 50 percent import dependent for another 30.

At the end of the year, the National Mining Association partnered with RealClearPolitics to host, “Minerals: The Overlooked Foundation of Our Future”. The event brought together industry experts, analysts and members of the government to explore the importance of minerals to our nation’s future. At the event, panelists discussed the obstacles our own processes put in the way of accessing the vast minerals resources available in the U.S. Casey Hammond, Acting Assistant Secretary at the Department of the Interior, gave a concrete example of self-imposed hurdles and recent progress:

“When we arrived in this administration, your typical environmental impact statement under NEPA, will take about four years and it could be around 1,500 pages, which meant no one was reading the document except for the lawyers that really litigate on it. What Secretary Bernhardt did early on was say, okay, we’re going to have a process where we’re going to create documents that people are actually going to read and they’re going to inform decision making the way NEPA was intended. So now after a couple of years in the administration, we have 150 pages for an EIS and somewhere just over a year (for its development).”

These developments are steps in the right direction for mining but are not comprehensive. To secure a brighter future for our country we must take more common sense steps like this to move the needle on the issues that keep the United States’ minerals locked away. Without action, other nations – adversaries and allies alike – will seize the opportunity to supply the world’s rapidly growing demands for minerals. Together, we must raise awareness of the important role minerals play in our lives and our ability to foster growth within the industries that provide for our nation.

Join us as we defend America’s mining industry in a new decade.