As Congress begins to address the President’s plan to create millions of new jobs and rebuild our country’s infrastructure, policymakers should look to where our supply chains begin: the raw materials that are the building blocks of everything that is made in America. Any infrastructure push aimed at bringing stability and growth to our economy should begin with American-mined materials.

There is no denying that America’s infrastructure is in serious need of an overhaul. The U.S. is ranked 13th in the world for the quality of our infrastructure. We have tremendous opportunities to put Americans back to work by rebuilding crumbling tunnels, ports and bridges, but to do so we need bold commitments to support American mining. From highways to bridges, water systems to broadband, electricity grids and charging networks, vast amounts of metals and minerals will be needed, and they should come from American mines, that offer high-paying, stable jobs and operate in accordance with the most stringent environmental and safety standards in the world. 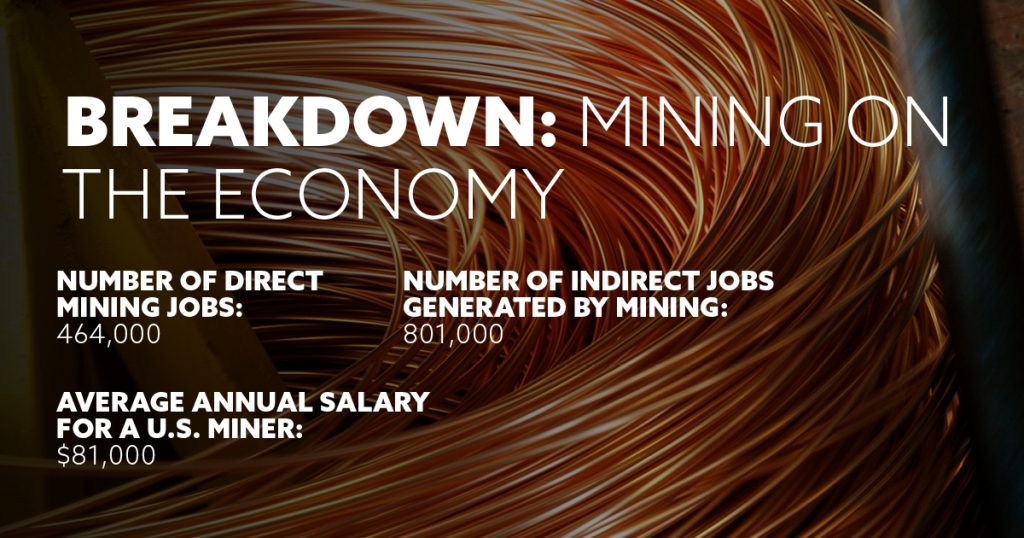 The U.S is home to more than $6.2 trillion in mineral reserves, which provides us a competitive advantage on the world stage. But it is an asset we’re not fully utilizing due to permitting processes that are marred by redundancy, uncertainty and a lack of transparency. If policymakers fail to address this reality, their inaction strengthens our geopolitical rivals’ dominance of the world’s mineral supply chains.

One area of the President’s package that holds significant promise, but is also heavily dependent on increased support for American mining, is electric vehicles. The plan includes $174 billion to promote electric vehicles and EV charging stations. Recently, American auto manufacturers wrote a letter to the President outlining the need for a strong domestic supply chain of battery metals. Given the fact that electric vehicles are exponentially more minerals intensive than combustion vehicles, the shortcomings in our domestic minerals supply chain cannot be ignored.

The promise of new jobs, modern infrastructure and our energy future all depend on the domestic availability of minerals like copper, molybdenum, iron, kyanite, lithium, nickel and many more mined materials.

Learn more about why made-in-America should mean mined-in-America.