The Blog The Importance of Copper for Modern Life

Copper is a versatile and recyclable material that is arguably mankind’s most important metal.

Dating back thousands of years, copper has been used since early civilization and possesses unique properties that make it essential for modern civilization. It’s one of the few metals that has anti-bacterial properties that make it ideal for medical applications. It’s also recyclable, meaning it’s an eco-friendly metal that can be used repeatedly. It’s so malleable it can be shaped and formed into small wires without breaking. This versatility and its high electrical and heat conductivity make it essential for electrical components used across industries and continents. Applications such as smart devices (like the device you’re reading this from), building wiring, telecommunication and electronics account for roughly three-quarters of global copper use. But what’s recently drawn attention – and what experts predict will create a supply shortage – is copper’s important role in our energy future.

The United States, European Union and numerous other governments have announced net-zero emissions goals, with plans to accomplish them by 2050 using technologies made possible by copper. Electric vehicles and their batteries, as well as solar and wind power, would not be possible without this ‘basic metal of electrification.’ The 23 kg of copper used in internal combustion engines is doubled for hybrid vehicles and nearly quadrupled for all-electric vehicles. According to S&P Global’s The Future of Copper report, copper demand is expected to double by 2035 and continue to grow thereafter. 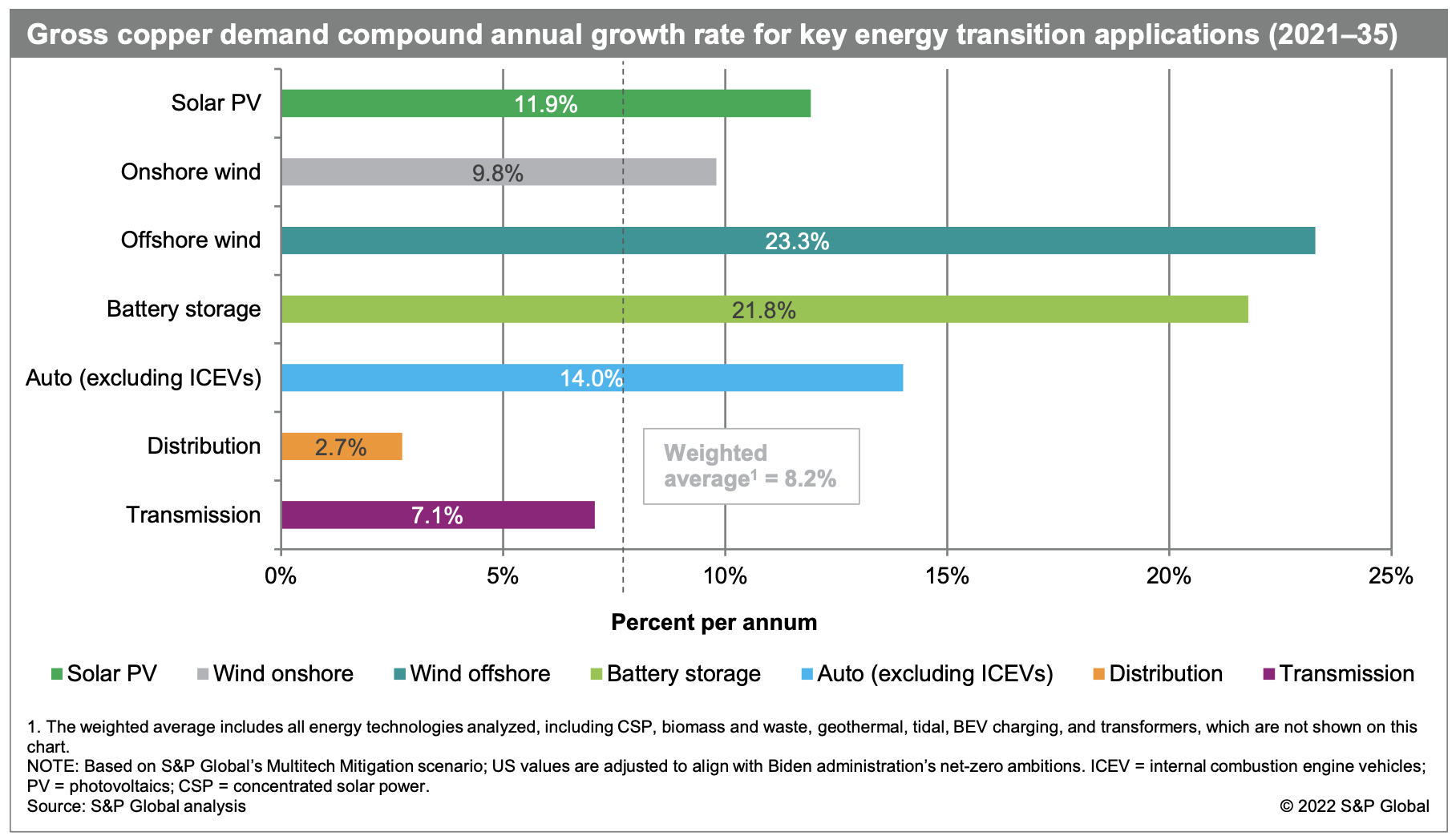 As noted by the International Energy Agency, copper is a fundamental element of sustainable technologies, most notably offshore wind power and battery storage. Yet despite the 48 million metric tons of copper in U.S. reserves, 45 percent of our apparent consumption is imported. Nearly half of all U.S. refined copper comes from Chile, with Canada and Mexico providing essential supplies as well.

The United States must further develop a domestic supply of copper to stay competitive in the race for our energy future. We have the resources, but the lengthy U.S. mine permitting process is slowing down our competitiveness, with it taking five times longer to gain approval to mine domestic minerals than it does for countries like Canada and Australia, nations with comparable environmental standards. The domestic production of copper is not only essential to U.S. sustainability but also to our economy.

There are currently 25 copper mines within U.S. borders, most with a production capacity of less than 100,000 metric tons per day. Proposed mines such as Rosemont and Resolution Copper have the potential to supply large amounts of copper but have been tied up in permitting since 2007 and 2013, respectively.

It’s time for America to modernize its permitting processes and build the copper industrial base needed for a more sustainable future.
Learn more about copper here and take action here to support mine permitting reform.