The Blog Report: Demand for silver expected to rebound in 2014

Report: Demand for silver expected to rebound in 2014

Despite a six percent decrease in silver consumption projected for 2013, resulting from the sluggish global economy, a new report commissioned by the Silver Institute found that silver consumption is expected to rebound in 2014. This is due to increased demand for consumer products—specifically automobiles and electronics—in emerging markets where rapidly advancing living standards means such products have become increasingly affordable and desirable.

The report notes that the largest end-use of silver is in the electrical and electronics sector, which includes products such as computers, televisions, cell phones, tablets, as well as photovoltaics. 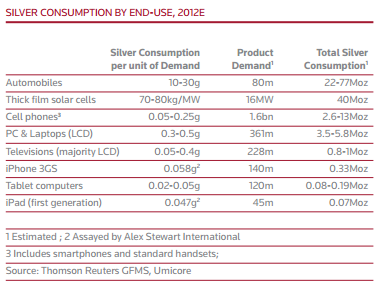 Since the industrial revolution, the U.S. has enjoyed one of the ...

@MiningFan
Want more U.S.-made electric vehicles? Benchmark Mineral Intelligence exposes gaps in domestic mining and manufactu… https://t.co/rPtqvLQmyi
@MiningFan
Instead of having China supply metals for our military, the U.S. is looking north as part of its strategy. Read mor… https://t.co/MEOUbqmoBA
@MiningFan
Only 10 percent of mining companies make it to drilling and one in 10,000 make it to production. Hear from experts… https://t.co/j6nNzQe9Oz