The global demand for minerals has placed a spotlight on the need for a stronger industrial base, one that includes more domestic production and processing of metals that are critical for a modern society. Our level of dependence on Russian uranium for nuclear power and on China for rare earths and a full range of materials required for electric vehicles is both outsized and unnecessary. Despite the critical role of minerals in securing our country’s economic future and the protection of our planet, the U.S. continues to delay many high-value mining projects while deepening our import dependence for the materials they provide.

The race to deploy advanced energy technologies capable of addressing the climate challenge is among the major drivers of mineral demands, expected to increase up to 1,000 percent compared to current numbers. Findings from the White House, International Energy Agency and the Department of Defense reveal a growing threat to energy, economic and national security if western powers fail to remain competitive in the minerals race. 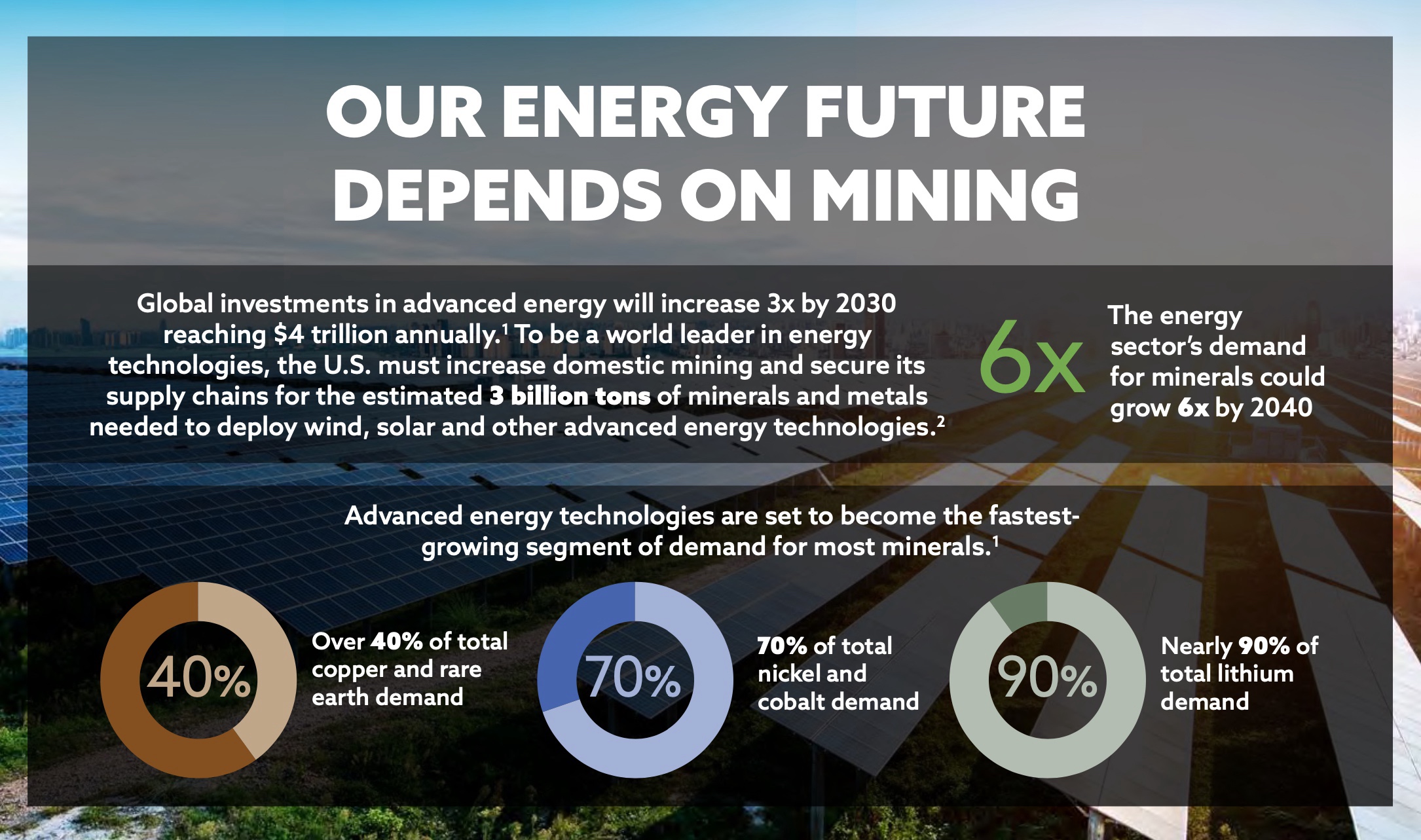 The Push for Permitting Reform

A cumbersome, duplicative and uncertain permitting process has made the U.S. less competitive and more reliant on imported minerals. It takes 7 to 10 years for a mining permit in the U.S while other countries like Canada and Australia—with similar environmental standards—can accomplish the same task in two to three years.

While the White House has pledged to commit funding and resources to secure supply chains, significant issues continue to block critical mining projects in the U.S. at a time when we simply cannot afford any more delays. It’s time for action, not obstacles.

The U.S. is home to vast mineral resources from gold, silver and copper to lithium, rare earths and antimony. These minerals power our world and can be developed on U.S. soil, under world-leading environmental and labor standards. Across the country, proposed mining projects hold the promise of a made in America future.

As the global demand for lithium is expected to rise to greater than 1.3 million tonnes by 2040, less than two percent of it is currently produced in the U.S. Despite the urgent need to develop U.S. production, projects like Lithium America’s Thacker Pass remain in permitting limbo. Thacker Pass is the largest known lithium resource in the U.S., capable of providing battery-grade lithium carbonate and employing up to 1,000 contractors.

Antimony is a critical mineral essential for solar panels, wind turbines and electric vehicle batteries. In the great state of Idaho, Perpetua Resources’ proposed Stibnite Gold Project would produce from the largest known antimony resource in the U.S., supplying approximately 35 percent of U.S. demand in the first six years.

Rare earth elements are vital inputs to electric vehicle batteries and are among the list of critical minerals that are controlled by Chinese-backed operations. In the U.S., the La Paz Rare Earths and Scandium Project would be the largest project of its kind, capable of supporting domestic production to meet growing need.

The Path to Advanced Energy is Paved with Minerals

As the U.S. and other nations embrace the path to net-zero, electric vehicles, solar panels, wind farms and other energy technologies will require a large amount of new minerals. The U.S. can’t continue to rely mainly on imported minerals. To ensure our economic and national security we need to develop and implement a comprehensive minerals strategy that includes more domestic production and processing, working closely with allies, recycling and reuse, and other methods that will help us secure our supply chains.

The U.S. must focus on supplying these metals at home rather than continue to import them from unstable sources and geopolitical foes that don’t have the same levels of stringent environmental and labor standards.

Support U.S. mining by learning more about the permitting process.

Click here to learn how we can reform mine permitting today.