The U.S. Energy Industry Administration’s (EIA) Annual Energy Outlook is a detailed report that focuses on a multitude of factors—from market trends to changing rules and regulations— to inform and shape the projections for the United States’ energy markets through 2040. This year, the report projected a substantial increase in renewable electricity generation, particularly in the areas of wind and solar power: 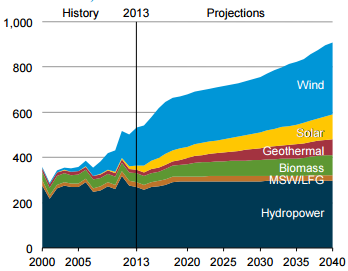 “The largest growth [through 2040] is seen for wind and solar generation…Wind-powered generation, the second-largest category of renewable electricity generation in 2013, becomes the largest contributor in 2038 (including wind generation by utilities and end-users onsite).”

What does this mean for the mining sector? Minerals and metals are the essential building blocks of advanced energy technologies like wind and solar. To name a few, minerals like rare earths, copper and silver are used in wind turbines, hybrid vehicles and solar panels. A single wind turbine, for example, can contain 335 tons of steel, 4.7 tons of copper, 3 tons of aluminum and 700-plus pounds of rare earth minerals. Moreover, silver is essential to the solar industry, which uses an estimated 52.4 million ounces (roughly 5 percent of the world's annual silver supply), and it is projected that 70 million ounces of silver will be used for solar in 2016. Minerals are clearly a critical part of the production of America’s advanced energy technologies.

“Take for instance President Barack Obama’s call for the U.S. to develop advanced energy technologies that will lead the world — from cutting-edge car batteries to wind turbines and solar panels. Those breakthroughs require breaking ground and mining the minerals needed to produce them.”

If the United States wants to be the global innovator in advanced energy technologies and meet the demands that EIA estimates by 2040, we must work to secure a reliable supply of domestic minerals. By supporting “The American Mineral Security Act of 2015” in the Senate and the “National Strategic and Critical Minerals Production Act of 2015” in the House, we can ensure better access to domestic minerals and metals and secure the nation's future in advanced energy technology.

As we near the end of Energy Action month in October, we want to ...

Minerals mining and advanced energy can, and must, coexist

On July 5, the Bureau of Land Management identified 17 so-calle...